After all the brilliance and energy in the first movement, the second movement, or Introduzione as Beethoven prefers to call it, descends into a slow-moving reflection. One simple trick that Beethoven uses here is the use of the subdominant. When that first F is heard in the bass, we get the feeling of lesser tension and energy than was in the last C-major chord. That is a well-established effect that comes with a subdominant chord: less tension. Mozart uses this a lot, and just for fun, let’s take a look at the difference in Mozart’s and Beethoven’s way of implementing the subdominant in the second movement, because it also shows us  the difference of style of those two composers. As well, it serves as a good example as a starting point to tell the musical story of the Introduzione

Let’s first listen to the end of the first movement of the Waldstein sonata, and the very beginning of the next movement.

Now, let’s listen to the end of the first movement as well as the beginning of second, of Mozart’s sonata K330, the same tonalities apply, C major and F Major.

Before I write about the differences here, I just want to say that I know that you can’t generalise too much, but still: these examples really do show the differences between how the two composers create their magic in ways that are quite typical for them.

One thing that is, interestingly, similar in both first movements is the turn to a lyrical, more introvert part at the end. For Beethoven it’s the second theme played in a context of much more contemplation and calm than when it’s otherwise played. In Mozart’s case it’s the magical lyrical turn at the end of a movement that he so often creates, this time with the melody that starts the development: as with Beethoven, the context is different and has less of a energetic momentum.

The first difference is that while Mozart, after introducing the more soft spoken theme, continues with the calm atmosphere to the end of the movement, and in that way he sets up for the beginning of the second movement in a smooth, seamless way. He ends with a C, and starts the second movement with same C.

This, to me, is one side of Mozart that he does better than anyone else. The seamless changes in character and emotions. At the same time as he ends the first movement, he has set up perfectly to continue with the second movement as if they are one organism.

Beethoven goes for the exact opposite. As so often, he knits together different parts of his music by contrast. The fortissimo chords at the end displays openness, momentum and power as well as a brilliant sound at the top part of the piano. When he starts the second movement, it is all so different. A lonely octave in pianissimo, in the dark, lower part of the piano. Instead of momentum and energy, we have stillness. Instead of extrovert music, we have thoughtful, introvert music.

The second big difference is what happens once the second movement starts, and this is also a great example of a quite typical difference of Mozart and Beethoven. While Mozart starts and ends the first phrase in, from a form perspective, a traditional way, Beethoven’s low octave is the start of a search for new, daring ways to go about, both harmonically and in terms of dynamics.

The Introduzione starts with a movement which is searching upwards, a sort of gentle pleading (or desire or whatever YOU think), after two “pleadings” three chords answer in a calming way:

With just these few seconds, we have really entered the world of Beethoven. First and foremost, his unparalleled skill in having the listener enter a new world right away, the moment the first octave sounds. It feels so obvious, like this world of mystery and introspect has been there all the time. But whether it is the start of the fifth symphony, or the Pathétique sonata, or the Tempest sonata… Beethoven’s ability to throw us right into something is breathtaking.

Secondly, how he continues from that low F is also something, say, Mozart would not do in a slow movement. He starts on an F, and just in the next bar, we end up in E Major. This is not exactly our typical classical “Tonic-to-dominant-back-to-tonic” kind of phrase.

Well, you might say, why the need to analyse harmonically here? That is boring! Well if you think so, too bad, but this is the simple truth: As much as this sonata is in the “basic” tonality of C-major, the chord progressions and the way Beethoven uses harmonies in this piece is a fundamental part of it. Sometimes I think he chose that basic tonality just because he was keen on really experimenting with tonalities in the sonata.

In fact, pretty much everything else in this first phrase is standard procedure. The 2+2+4 bars, the phrase beginning and ending in the same tonality etc. But the fleeting harmonies are really what makes this start so special.

The phrase continues with two more “pleadings” and the calming three chords, after this it gets more intense and finally the phrase ends by coming back to the same F-major that the movement started with.

Now, let’s take a look at those bars in the score and check out the bass line:

I have drawn out for you to follow the bass line that goes downwards in chromatic steps. Why? Because take a look at the bass line at the beginning of the first movement: 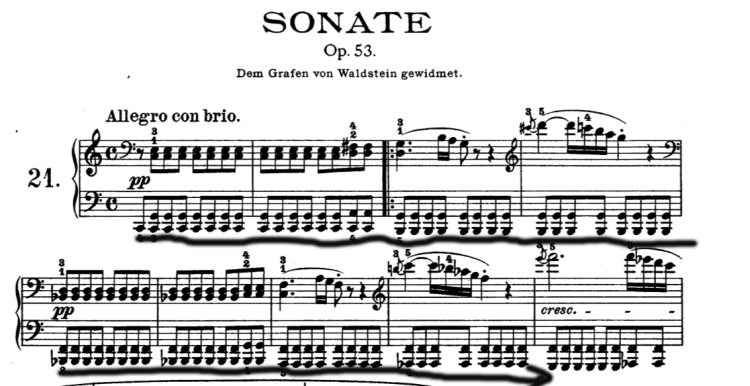 A coincidence? No way. Just some divine thing in the piece that the composer was not even aware of that it happened while he was composing? Ehh, no. I run into people who have that theory: that thematic connections are made unconsciously, as a measure of the composer’s genius. That view doesn’t really take into account how composing works, how Beethoven’s sketch books looks like, and the the history of Das Thema, which was a popular way of composing: one single theme was supposed to be the seed where the whole piece grew from.

Now, as I have mentioned before, this is fancy to know but it doesn’t really help you in understanding the music, and it certainly doesn’t make a pianist play it any better. Or does it? Is it a way of telling the musical story? That this completely different mood in the Introduzione is from one and the same person? I honestly don’t know. Letting your imagination loose is wonderful, and risky at the same time. The further you go, the further away from the truth you might get… or, you might be spot on. All we know for sure is that nobody knows.

But let’s continue. After the introduction of the Introduzione, so to speak, a melody is heard:

This is, to me, the soloist tenor entering, as in a baroque aria. The introduction before he entered has been the orchestra setting the atmosphere for him. To explain a little more, here is an example of an aria of a baroque opera, Ombra mai fu in Handel’s Serse.

In this scene, which starts the opera, is looking up at his beloved plane tree, and sings:

Tender and beautiful fronds
of my beloved plane tree,
let Fate smile upon you.
May thunder, lightning, and storms
never disturb your dear peace,
nor may you by blowing winds be profaned.

Never was a shade
of any plant
dearer and more lovely,
or more sweet.

Introvert contemplation in a moment of calm and peace. Very much like in the second movement of the Waldstein sonata.

What I am after here is the feeling of a theatrical moment in the music. The feeling of a scene, a human voice telling himself, and therefore us, something.
To me that is one of the main keys to understanding this movement.

The melodic solo part lasts for a very short time and soon descends back into the sustained orchestral octaves (celli and double basses?) and the “pleading” motive. This time, there is more tension that grows, and the pleading motive turns into urgency and despair: