( From Shakespeare’s The Tempest)

The name
The sonata op. 31 no. 2 is nicknamed the “Tempest sonata“, not a name by Beethoven himself but by Anton Schindler, or rather because of Anton Schindler. Schindler was Beethoven’s secretary and after the composer’s death, he told tons of stories, many of them not true. According to Schindler, when he asked Beethoven about this sonata, the answer was that if he read Shakespeare’s “The Tempest” he would understand the music.

I’m not going to pretend that I have read “The Tempest” (although I found the above quote while glancing through the play) but still, I have a very hard time believing this story. But I like names on sonatas and “Tempest” sonata is a good one, not bad at all for this music.

A recitative beginning
The first movement begins mysteriously. While many pieces start with a statement, like the eight symphony for example:

The Tempest sonata starts with something that would be more like a question.

It is a great way to start a piece: it creates an atmosphere right away, it feels a little bit like a a curtain is slowly going up in a theater, silencing the audience who is eagerly anticipating what will happen.

But it’s more than that. The way this chord is written, it makes us think of a recitative.

So what is a recitative and why does this chord make us think of one? Let’s lighten things up a little with this scene from Family Guy:

When Brian the dog comes home, this happens. As a bonus, a couple of minutes which I think are funny ( maybe you don’t)

OK. That was the most awful, boring recitative ever. But I like when he says that he can’t express that “amelodically”.

A recitative is something “sing-spoken”, basically when the words are such that they resemble more of spoken sentences than sung verses. Recitatives are used in opera, oratorios and such, where there is a literal story to tell. Let’s say that the words are “My love, I was at the market today, and everybody is talking about the big storm coming”. Who wants to write a song with those lyrics? Nobody, so there shall be a recitative.

Why not just say the words then, you might ask? Well, many composers thought the same thing. Mozart was not fond of long recitatives, he found them boring. Rossini cared so little for how the recitatives were done in his operas that he often let someone else write them. But Rossini was also known for being the laziest composer of all times. Kind of the Garfield of composers.

Jean-Jacques Rousseau and realism in art
Recitatives normally moves the plot forward, and then comes an aria to react emotionally to what was…uh…said, no I mean sung, in the recitative. Let’s listen to a recitative from Mozart’s Così fan tutte (meaning “So do they all”). The story: two officers claims their fiancées will be forever faithful. A man called Alfonso thinks not, and says he can prove it (which he does). His plan starts with fooling the women that their men have to go to war (to read the whole story you can click here):

If you think it’s quite silly, it is supposed to be.

Why, you might wonder, get Family Guy into this? Well, there is the obvious relation with both Brian the dog’s and the two men’s “ridiculously high” expectations of their women (and in both cases, the men looks stupid in being full of themselves).

But more importantly, there is this: the opinion that art should present people and life more realistically. It should not glorify people but show their weaknesses, and we should accept it and learn from it. 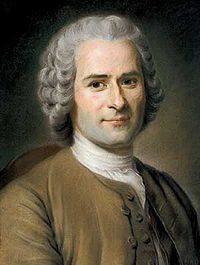 Jean-Jacques Rousseau was the most important philosopher and writer representing this trend during the times of Mozart. He thought that the Arts, in its polished but substanceless manners and glorification of heroes, maintained the status-quo of society instead of pushing it towards more equality and freedom. “For a long time the society of man has offered only false appearance without reality, without truth” writes Rosseau.
He thought the arts should start “to distinguish reality from appearance and the man of nature from the fictitious and fantastic man who is the fruit of our institutions and prejudices”.

If you think of it, this discussion is still relevant. To some of us, Family Guy is not only a show with silly jokes, it’s a refreshing show with a dysfunctional family which is more realistic than many Hollywood movies where everyone is pretty, everyone has money without working a lot and nobody seem to go to the bathroom (except in Dumb and Dumber).

Mozart’s letters are full of making fun of powerful people, and his operas have “real” people rather than heroes. Family Guy is the modern version of this thinking. Family Guy is poking fun of “Family values”, the perception of a perfect family, all happy and sane.
Well, they ARE happy. With all their imperfections.

Beethoven and heroism
So, back to Beethoven: while Mozart is quite Family Guy, Beethoven is not so much. Beethoven brings back the heroic, emotionally somewhat utopian style (which is the reason that the Nazi’s, sadly, used Beethoven’s ninth as propaganda music; they could never do that with Mozart’s music).

He found Mozart operas music of a genius, but he thought the story of “Così fan tutte” was frivolous and immoral. Beethoven would never write an aria where a eunuch will give love advice, or something like this (scroll to the video and text about “Marriage of Figaro”). I bet many of you see Mozart as the more “clean” and “correct” of those two great composers, but I beg to differ. To me, Mozart is more The Rolling Stones and Beethoven is more The Beatles

Beethoven using a “recitative-chord”
And now, back to the Tempest sonata!
Why is the beginning of the “Tempest” sonata making us think of a recitative? Well, let’s listen to the chord played before the recitative:

This is how basically what would come before every recitative. It is a chord played as an arpeggio in first inversion, meaning that its lowest note, the bass-note, is not the main note, but the third note in that key’s scale.  So, if it’s G major like in this picture, then the first chord with G as bass is called root position, the second chord is called…first inversion. 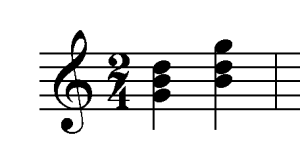 The beginning of the Tempest Sonata would be a very typical chord to introduce a recitative (and no doubt Beethoven was counting on the listeners to acknowledge that), but played a lot slower:

So, now we would think there would be a recitative or something like it? Of course not. Beethoven loves to make the music seemingly go one way, but instead he takes a completely different turn. Out of nothing comes this haunting, quite fast theme. To me it’s like something distressing, thoughts and feelings that you would rather stay away coming at you:

The anguish goes away…then silence…then the arpeggio again, but this time in a new tonality:

The new tonality is quite far away from the original one, so Beethoven keep surprising us, the mystery keeps going. Of course, the haunting theme comes back, but now it doesn’t stop.

There is something theatrical in this music, no? I really think so, and that might be why the Shakespearian name has stuck.

A typical “motive relationship” in Beethoven
The “haunted” theme comes closer and closer until this statement explodes in the bass:

New motive, right? Ah, not really. Listen to the beginning, the end of the arpeggio:

The last four notes: long…short,short, long…is the same motive as:

and now this motive has turned into a rage, played again and again, with more and more urgency:

By now, we have experienced the main contrast in this movement: a delicate stillness versus an almost raw energy. And as many times before, Beethoven uses very little “building material” to “build” the music. The haunting motive:

Then comes this glittery passage to close the exposition, I love this part: it has no real melody, but it is very beautiful nevertheless. It’s actually a canon.

The development starts with the arpeggios we heard in the beginning, but now the arpeggios expand and the music reaches a point where it comes to a stop: again, Beethoven uses the pedal to create a feeling of “vibrating air”. Then, the shock. I can just imagine how the audience jumped in their seats with this sudden fortissimo (they still do, to a degree):

But now! Beethoven instructs the pianist to keep the pedal down, and…here comes the recitative:

This is a quite amazing moment, not only for its originality. There is a clear rhetoric spirit, but…there is also such melodic beauty in this part. And remember, a recitative is not supposed to be too melodic, because if you can sing it as an aria, why make a recitative?

However, Beethoven has no lyrics to worry about and as the creative genius he is, he turns this recitative to the most melodic, the most expressively human and the most painful (I think) part of the whole first movement.

***
The movement ends as it begins, mysteriously. It’s like it disappears into the territory of unknown…